The other teens who were shot were stable when they were taken to a hospital, but the 15-year-old was pronounced dead at the scene, Avery said.

Police officials had planned a Monday afternoon news conference to address the spree of weekend shootings but have postponed it due to weather. 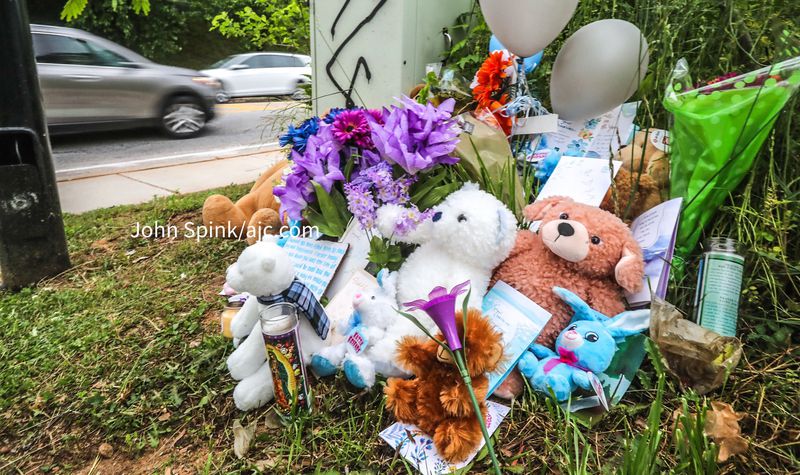 Friends and neighbors left flowers and plush toys at a memorial for 15-year-old Diamond Johnson, who was fatally shot near an Atlanta shopping plaza.

Investigators said the incident began when two groups of teens got into a fight nearby. According to Channel 2, multiple fights were reported at Grant Park earlier in the evening.

“After the fight, other people, including adults, came to the location, and the confrontation continued, eventually leading to gunfire,” Avery said.

It was not clear Sunday if charges have been filed in the case.

Earlier Saturday, police were sent to the 300 block of Delevan Street about 7:15 p.m. after a shooting was reported. When they arrived, they found a 41-year-old man with a gunshot wound, Avery said.

A child was found nearby with a “minor injury” and another man was found with multiple gunshot wounds, police said. The child was treated at the scene, and both men were taken to a hospital.

Three hours later, at 10:10 p.m., officers responded to a report of a person shot on Thomasville Boulevard in southeast Atlanta and found a 33-year-old woman with a gunshot wound. She was stable when she was taken to a hospital, police said.

Investigators learned the woman’s son had been involved in a fight with another child, and adults became involved, according to police. No charges have been announced in that case.

Within the hour, another report of a person shot took officers to Atlantic Station. They found a 31-year-old man, identified by police as Keith Walker, shot once outside the Yard House restaurant shortly before 11 p.m. A woman told police Walker was assaulting her when bystanders came to help, and she heard a gunshot wound, police told Channel 2.

Witnesses did not see who fired the shots, the news station reported. Walker was arrested on a charge of battery and taken to a hospital for treatment.

The following shooting, which was reported after midnight Sunday, was fatal. Officers were called to Artisans Bar and Gallery on Peachtree Street after two men in their 20s were shot, according to Avery. They found a 20-year-old man with a gunshot wound, Avery said. He was stable when he was taken to a hospital.

Another victim later showed up at a hospital and died of his injuries. While his name has not been released, police said the slain victim is 22 years old.

Police said the shooting was the result of an argument that began inside the club about 12:40 a.m. and spilled outside. It was not clear if both victims were involved in the initial argument.

The final shooting of the weekend was reported about 1 a.m. Sunday. Officers were sent to the 2300 block of Cheshire Bridge Road and found a 21-year-old victim. Investigators said the man was caught in the middle of a dispute between his sister and her husband at a home on Elizabeth Lane.

At some point, the suspect pulled out a gun and shot the 21-year-old, Avery said. The victim was taken to a hospital and was stable Sunday.

“We continue to be shocked at the number of people who are willing to take a life, abandon their family, risk going to prison, and put people in harm’s way by using guns to solve disagreements,” the APD statement said. “It is always a matter of choice. We encourage people to agree to disagree and to walking away from escalating arguments. No argument is worth destroying lives. We encourage people to think before they reach for a gun.”

Silver Sands State Park in Milford was closed for several hours Monday afternoon as police searched for a suspect...

One of the top candidates for mayor of New York is a former police captain who has said addressing...

PORTLAND, Ore. (AP) — Police on Sunday were getting help from the FBI in investigating the latest round of...

PRAYAGRAJ, India (AP) — Police are reaching out to villagers in northern India to investigate the recovery of bodies...

Biden, in Police Week statement, talks of ‘deep sense of distrust’ toward cops

President Biden is marking Police Week with a statement that includes language about the "deep sense of distrust" toward...