Clashes broke out Sunday morning in three cities across Israel as police attempted to enforce coronavirus lockdown restrictions in a number of ultra-Orthodox communities.

In the Jerusalem neighborhood of Mea Shearim, hundreds of people clashed with police attempting to shut down a yeshiva that had opened illegally.

Police said that officers who arrived at the yeshiva, or religious seminary, were quickly surrounded by a crowd shouting insults at them and throwing trash and other debris in their direction.

Video of the incident showed a number of people calling the officers “Nazis” and “kapos,” the name for Jewish collaborators coerced into service by the Third Reich.

Police said one person was arrested and water cannon trucks were later brought in to disperse the crowd.

In the southern coastal city of Ashdod, police were confronted while closing down studies at an ultra-Orthodox elementary school that had opened despite Health Ministry and Education Ministry rules preventing in-person studies.

Police said “several dozen people who arrived on the scene tried to force their way into the compound and confronted the officers inside.” Police added that the intruders injured four officers and caused damage to the fence surrounding the school.

Protesters who had gathered outside also blocked traffic and confronted police officers, the statement said. Four people were arrested.

In the predominantly ultra-Orthodox city of Bnei Brak, several clashes reportedly broke out as police tried to shut down schools linked to the Vizhnitz Hasidic dynasty, whose head rabbi on Saturday ruled that educational institutions should open, before apparently backtracking hours later.

Police said in response to the violence that they would continue to enforce virus restrictions, “in all communities.”

The lockdown, in its third week and extended till January 31, has shuttered all nonessential businesses along with the entire education system, excluding special education. Some ultra-Orthodox schools, however, have continued to operate in violation of the rules.

Last week clashes broke out between police and rioters opposed to coronavirus lockdown restrictions in Bnei Brak after a mob in the city injured a police officer on patrol. At least six people were arrested for disturbing the peace. Those rioters belonged to an extremist faction of the Vizhnitz Hasidic sect, according to Hebrew media reports.

Prime Minister Benjamin Netanyahu condemned the Friday attack in Bnei Brak, stating that “we will act with a heavy hand against lawbreakers, first and foremost against those who raised their hands against our policewomen and policemen.”

Critics have accused Netanyahu of avoiding cracking down on the Haredi public in order not to anger his ultra-Orthodox coalition partners.

Additional reports of lockdown violations among the ultra-Orthodox emerged Saturday, including a mass gathering over the weekend in the Sanz Hasidic sect in Netanya. Other sects are expected to hold prayers and gatherings this week. 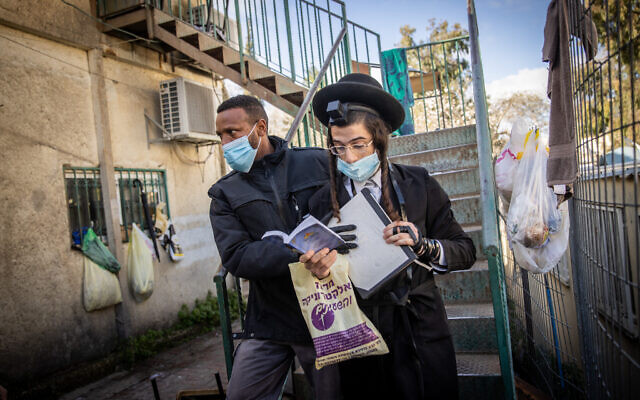 Police officers raid a Yeshiva that is open in violation of the COVID-19 emergency regulations, in the Sanhedria Neighborhood of Jerusalem on January 19, 2021. (Yonatan Sindel/Flash90)

Netanyahu and Edelstein made appeals last week to Rabbi Chaim…

Ride along with Officer Jimmy Weller as he patrols the region's border of Lake Michigan as part of the...

HYDE PARK, N.Y. — A pedestrian died after being struck by a Dutchess County Sheriff’s Office patrol vehicle on...

KENOSHA, Wis. (CBS 58) -- A crazy night in Kenosha after police say a man acting erratically at a...